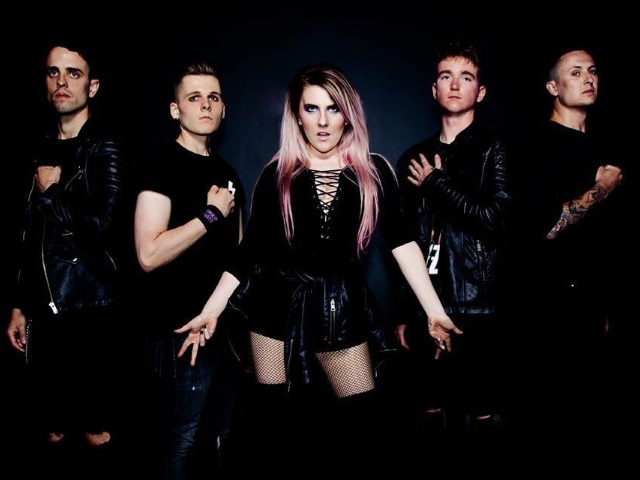 Newcastle quintet Tomorrow Is Lost have released their debut EP, The Shadowman. Having spent the last two years relentlessly playing shows and building up a fanbase, the lead up to the debut has been nothing but incredible and worth the wait.

The EP begins with We Are The Lost, a track that gained a substantial amount of support from Planet Rock last year. Cass King’s powerful vocals become the immediate centre of attention, hooking you in particularly during the big, sing-along chorus. Stuttering guitar lines from Joe Mac and Ryan O’Hara help to get the adrenaline pumping, throwing you side to side and upside down. Flaunting a solid instrumental it’s the perfect chance for the guitarists, bassist Adam Clements and drummer Marc Rush to show off how well they work alongside each other, before King reappears harmonising with herself.

Insane takes the release in a different direction, with a slow, steady build up it’s hard to anticipate what’s actually around the corner. There’s an element of Lady Gaga-esque vocals which are hauntingly gorgeous – this isn’t what we were expecting but we love it nonetheless. Instantly turning things up a notch, the powerful lyrics “they tell me I’m insane” combine with obliterating guitars and drums, making this an anthemic effort. This is by far our favourite track on the release; the elements compliment each other and Tomorrow Is Lost have successfully brought their own unique touch to the bustling scene.

As we work our way through the release it becomes apparent that we’re getting taken on a musical ride, from fresh sounds to some good classic rock in the form of Rapture. This heavier track gets your toes tapping and head rocking from the onset and we love it. King manages to pack an emotive punch through lyrics like “we get knocked down, but we get back up,” which yes might be a bit cliché in the grand scheme of things, but it feels as if this was made for them to perform. Heading towards the end of the track there’s the biggest breakdown we’ve heard all release, it’s sheer carnage with rowdy drum lines and messy guitars trying to steal your attention as you struggle to decide on what to focus on.

Maintaining the heavy rock theme is No One Knows, a fast-paced, slightly manic and heavily drum-led track. Fluttering between rough, raw vocals and delicate melodic moments, no one knows what this track is going to hold. We’ll be honest, it doesn’t have that memorability factor that other tracks on the release possess. It’s the dual guitar work where this track shines as it is slick, vibrant and saves the track from being a totally forgettable number.

Rounding off the release is ShadowMan which sets off in a pretty calm, serene manner and continues as King’s vocals come into action. There’s an effortlessly powerful vibe and strength shines across this track, with the band coming together to bring the best of their abilities – with King’s layered, harmonised vocals upon scattered guitar lines it’s a recipe for success.

Tomorrow Is Lost have put themselves on the musical map and they’re one you need to keep an eye on. If you need an introduction to the band this EP sums up everything they’re about, with big rock riffs, drama, sing-along choruses and captivating vocals. With plenty of live shows on the cards for this year, find out where you can catch Tomorrow Is Lost HERE.

For Fans Of: Halestorm, The Pretty Reckless, Black Stone Cherry

VIDEO NEWS: Hot Milk Release Video For ‘Awful Ever After’