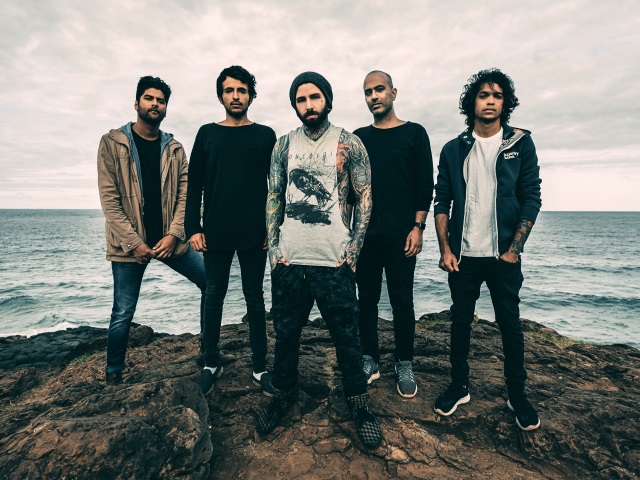 Currently in the middle of their USA tour in support of their latest album Sunshine Dust, we caught up with Skyharbor guitarist Keshav Dhar to hear his top tips and stories from the road, including memories of touring with Deftones and onstage mishaps!

The minutes on stage in front of a completely strange audience, particularly if we’re supporting a band whose fans don’t really know about us, and watching as they get into the music as the set goes on, and knowing that we’ve made someone’s evening better.

Being away from home and our loved ones. There’s something to be said about people who can keep their relationships strong through all the periods away, especially if it’s a different country/time zone, but for a lot of people, being away for so long so often can really take a huge toll on relationships.

For me: my own blanket and pillow, granola bars or nuts to snack on, Dr. Bronner’s arnica-menthol massage balm to relieve body ache that comes with playing consecutive shows and sleeping in a van, being able to be productive somehow on long drives, and a sense of humour.

When I need to kill time I like to read books, not serious reads but more like detective mysteries or that kind of genre where once you get sucked in you need to read all the way through and finish it. It’s amazing how those things can just make time feel like it’s disappearing sometimes.

Chino from the Deftones giving us a shout out on stage.

This one time in New Delhi where we were playing what was a homecoming show for me, and Krishna and Eric were constantly climbing on to the subs in front of the stage to get some elevation and look all badass and I kept wanting to do the same thing. So I jumped up on what I thought was a sub in front of me, except as soon as my feet landed I realised it was a big cabinet flight case…on wheels. That weren’t braked. The next 20 seconds were basically me flailing wildly mid-song to keep my balance, while playing my guitar, on top of a flight case that was rolling around uncontrollably. I somehow jumped backwards on to the stage and miraculously didn’t land flat on my backside.

This one show in Frankfurt where everything that could go wrong just went wrong on stage. I remember looking at a couple that was standing in the crowd – it was clear that the guy was a fan and his girlfriend was tagging along because she didn’t seem interested at all – but a point came where she nudged the guy and I could clearly see her lips saying “what the fuck are these guys doing?” because we were just dealing with a cascade of on-stage equipment fails. I just wanted to crawl into a hole at that moment.

We were hanging out at merch after playing a show in Luxembourg on the Deftones tour where a random massive Neanderthal looking bloke stalked over to our merch stand, grabbed Eric’s arm without warning and scrawled a massive signature over it, and then turned to our merch salesgirl and asked if he could buy her for 60 euros. Yup.

We’ve never really had any that I can remember that have been particularly funny or memorable. We don’t really drink out of control or anything, just the occasional beer every now and then.

Back in 2014, the last tour that Dan did with us in India, he was really sick and couldn’t sing at a show in Bangalore, or just about barely sing. He asked the crowd to help, and the crowd sang every word of every song so loud that we could barely hear ourselves even in our in-ear monitors, above them singing. I still get goosebumps to this date when I think of that show.

VIDEO NEWS: Slipknot Return With New Single ‘All Out Life’