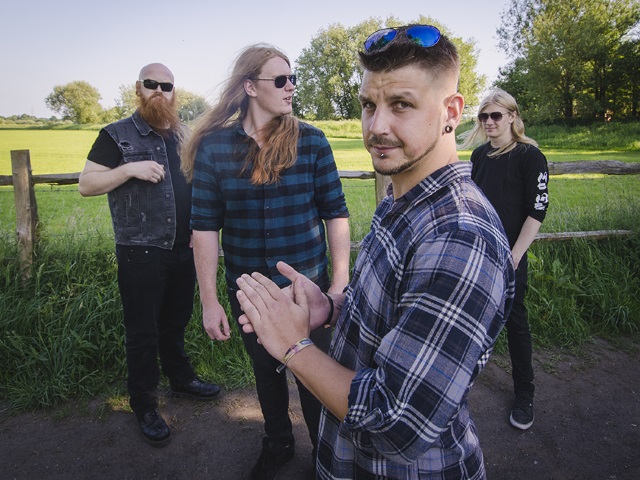 Progressive metal quartet Prognosis released their debut album Definition in September and have been playing shows up and down the country to celebrate. We caught up with the band to hear their top tips and stories from the road, from their touring essentials to their most outrageous moments and everything in between.

Phil: The main goal for 2018, apart from releasing our banging debut album of course, was to play as many shows outside of Manchester as we possibly could. And so, as simple as it sounds, the best thing about all the touring we’ve done this year has just been to be able to get in a car with my best mates, have a drink and blast some tunes, then get to a new city, play a loud and furious set to a load of new and unsuspecting people and just try to develop our live craft and enjoy the moment. We want to make sure that whoever sees us, whether it’s three people in a dingy bar a three hour drive away or a packed out venue, they will remember us. I love being in a band with the rest of the guys and travelling somewhere to play a set to new people in new places is literally what it’s all about for us. Some shows are better than others, we’ve played some shockers and some haven’t been the best organised or amazing nights, but we never regret playing a show.

Christian: Being let loose in a new place with your best friends and then blowing the roof off of the venue

Aaron: Being able to make an impact and an imprint with our music in different locations.

P: All of us plus gear squishing into our band car, a tiny little Vauxhall. Even when we slim down what we take, it is always cramped. Three hours in the car with no room to move, serious dead arse and the knowledge that any sharp turn will send the tower of drums, merch and pedals come tumbling down on you does make you dream of one day, just one day, owning a proper bus. It’s all for the cause though, we don’t mind doing it because we get to play all these shows for new and awesome people and check out different venues and their nearby takeaways but if we could have a bigger car that’d be grand.

P: A GBA Emulator and a Pokemon ROM: This is more for Christian and Phil, who are seriously hooked on playing Pokemon on our phones, but it really is a cracking way of whiling the hours away when on the road.

Your guitar: I forgot his when we played Birmingham the other month, like a muppet.

Car beers: Alphabet Brewing’s Flat White Stout is my winner at the moment.

Hand exerciser: Especially if there isn’t a backstage area, this is the best way to warm up for a show.

D: – Monster, Weed, Pokemon, Rogers profanisaurus and spare clothes for when you come off stage.

A: Fuel for my car, green tea, food,  full battery on my phone and more fuel.

P: When we’re not all playing Pokémon we tend to discuss the set list for that night and other band things, such as new merch designs and future plans, when driving to a gig. When we’re in a new city as there’s time to kill having a wander is always good fun.

C: Exploring a new place and searching for its largest, dirtiest and cheapest party mix takeaway.

P: So far Liverpool wins for that, but Northampton has a cracking and dirt cheap curry house.

P: We headlined a Metal 2 The Masses heat at EBGBs in Liverpool towards the start of the year and that show has really stuck with me for a lot of reasons. For those who haven’t been, EBGBs is a wicked little underground venue with bricked curved ceilings, Cavern Club style. You had to duck to get between the bar and the gig part of the venue, Christian was dying of the flu that night and slept through all the bands, despite being sat within three yards from the stage! I had a last minute run to Tesco to get him some paracetamol, some chocolate and a 7UP and then he was a new man. When it was our time to get on stage he just somehow snapped out of it and played a killer set. We were all on fire that night, the crowd was a great size and really receptive and we got to play a nice extended set. There was also personal drama going off that night which, while it tried to but a dampener on the evening, ended up bringing is closer together as a band for many reasons. It was a big night for growth as a band I feel. Plus the venue had cracking beer and there’s a dirt cheap pizza place just around the corner.

D: Meeting Emma and Sam at the Mammothfest best band competition we played in Northampton. They fell in love with the band and we’ve gone on to become really good friends who are really supportive of the band and great to hang out with.

C: Our album launch! It was one of the biggest crowds we’ve ever played to and we tore the roof off the place!

A: Messing about with the whole band on Brighton pier before Mammoth Fest. We really felt like a band and we went on rollercoasters and made giant bubbles.

P: Christian pooed in a Tesco’s bag once, although it wasn’t funny at the time… And I got shat on by a bird just before a set once too. Poo is still funny no matter how old you are, right? Then there was a time a fan got properly speared in the pit and he went flying over the monitor and onto my pedalboard. I really wanted to see if he was okay but I also didn’t want to stop playing. He literally went head over heels, I had this big mass of hair and shoes flying towards me, it was like something out of a cartoon.

P: That was also the same set where we had to start Drones, which I’m pretty sure was the first song of the set, again because none of us had a clue what was going on and we couldn’t bear murdering one of our favourite songs for any longer. Sorry, Wakefield.

D: When we played Waste, all got really lost and went into two minutes of improvised jamming because no one had any clue where we were and what was happening.

P: That whole gig was a bit Phoenix Nights really.

D: Having the police called on us by the venue because they were d**kheads.

P: The venue, a rock bar which had AC/DC and Pink Floyd pictures hung up on the wall, blamed us and “our kind of music” for a poorly attended gig – it was also piss poor organisation and a fan of ours did a piss on their door after they’d locked us out. Then there was the gig where the sound guy was nowhere to be seen whilst we were setting up, then appeared at the front of the stage telling us to turn the guitars down. Danny asked him, down the microphone, where he’d been when he was meant to do his job and that we wouldn’t be turning down for someone who didn’t show us any respect. It turns out he was doing cocaine in the toilets at the time.

C: Playing our stupidly heavy music to an audience with an average age of about 50 who didn’t like it at all…we won them over in the end though.

C: I don’t know, ask someone else…

D: Hunting down Phil after he went awol at an after party. I eventually found him emerging from the toilets looking very green. I have GoPro footage of it somewhere.

P: We played a gig on my birthday the other year and I remember being so wasted that I didn’t know why my guitar had stopped working, so went on a drunken rant about how much of a good time I was having instead of looking at my pedal board to see I’d unplugged myself. We’re playing on my birthday again this year…

A: Me and Phil were so drunk at Bloodstock we did about eight forward rolls in a row through a campsite for no reason, then I fell over and a guy came over and give us another beer!

P: I think Aaron got another beer off the guy for drinking from the first can while doing a backwards roll. I didn’t, I got drenched trying.

C: Having people we don’t know giving us genuine praise after a set and wanting to buy our stuff.

A: Seeing so many people turn up that night felt amazing and very humbling.

D: When the crowd chants for us during a show.

Phil: – That’s definitely an amazing feeling, when you feel a genuine warmth and buzz off a crowd, and you really do feed off that. Other highlights for me include playing Bloodstock, coming on stage just as Obituary finished, and seeing a swarm of people heading towards our stage, and the fact we got an order for a CD off a German doctor. There’s also a guy in Austria who really loves us and has been telling all his friends. That’s such a cool feeling.

See Prognosis live at one of the following shows:

MUSIC NEWS: Panic! At The Disco Release ‘The Greatest Show’