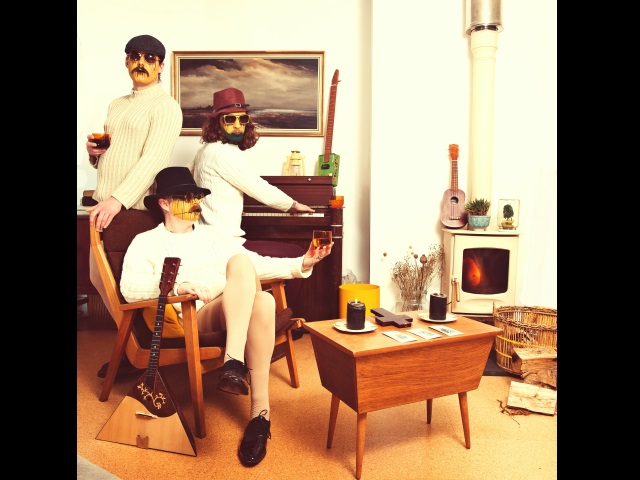 With the release of their album Come & Chutney earlier this year, we caught up with the kebab obsessed trio Chubby Thunderous Bad Kush Masters to talk about the latest record, Donald Trump and their ultimate fantasy kebab.

Your new album Come & Chutney  came out in July but let’s get the most important stuff out of the way first, we hear you love kebabs. What’s the best kebab you’ve ever had, where was it from and why was it the best?

Woody Grill, Camden – lo-fi but classic post-show kebab. The 2am production line is a sight to behold.

Al Safa Manchester – a more traditional sit-down affair, quality and quantity in abundance amidst the warm social hubbub and sound of prayer-calls.

Rusholme Chippy Manchester – it may look like a regular kebab joint, but don’t be fooled; this long-established establishment houses one of the finest ovens around and the bread is unbelievable. Quite possible the best of the best.

Ok back to band related stuff – how did the band meet and how long ago?

Maybe 2012 or 2013… Mark encountered Will at a naked bikers’ festival in Hertfordshire and begged him to hang out. Unfortunately, he said yes.

What can you tell us about your debut album Come & Chutney?

There’s not much to say, really. Come make some chutney with us later. It’ll be sweet. Or salty. Or umami. It’s what you make it.

The album artwork is rather special – is that your preferred weekend look?

You have a song called Doner Trump – tell us a bit about that. Are you big fans?

Who isn’t? WHATEVER WILL HE DO NEXT?! Classic dictator, ahhh, much lolz. But seriously, what a dick. It’s astonishing that he’s reached the position he’s in, yet it’s also not surprising, given the levels of xenophobia around the world and this anti-globalisation thing some people are keen on. What the fuck’s the problem with a larger, more inclusive society? Does it really matter if cultures change as humanity develops? It’s sad that things are going this way, or have they always been, we’ve just got better access to reading about it now? Fuck knows; what interesting times we live in.

Are there any new bands you’d recommend to Bring the Noise and its readers?

They might want to check out these midlanders called Black Sabbath, they’re really good although the first six albums are pretty garbage. Also Toto, Tronald and Tank.

Finally,  you’re on Masterchef in the finals, your challenge is to make the ultimate fantasy kebab – what’s in it and what do you call it?

The Sweet Brown Oath-Bringer 2000 feat. Barrymore would all be cooked in a clay oven. The hot, fresh naan would be stuffed with lamb mince, red chilli-infused döner meat, kobeda kebab, piri piri chicken döner and Cajun blackened shrimp kebab. The salad and sauce is just as important as the meat, though, so it would be served with fresh romain lettuce, vine tomatoes, pickled green peppers, jalapeno chillies, cucumber, red onion infused with sumac and lemon juice. Now the sauces – many people think there’s just a standard hot or chilli sauce; not with us. We would create 3 chilli sauces, complementing each different mouthful. Firstly, a standard Turkish chilli sauce of fire-roasted tomatoes, green chillies, garlic, parsley and lemon, seasoned well and blended. Then Iranian style, with yogurt, chilli powder, lemon, green chillies and turmeric. Finally the shit-the-bed hot sauce, which would be green chillies, habenero, Thai birds eye, jalapenos, lemon juice, melted cannabutter, parsley and Cajun spices. Condiments on the side would be hummous, crushed garlic yougurt to put the fires out, gherkins, pickles and a huge basket of Belgian frites loaded with Samurai sauce to push you over the edge. Then a pile of Smurf ice cream to curdle it up in your gut.