MUSIC INTERVIEW: Life On The Road With…Jake & The Jellyfish 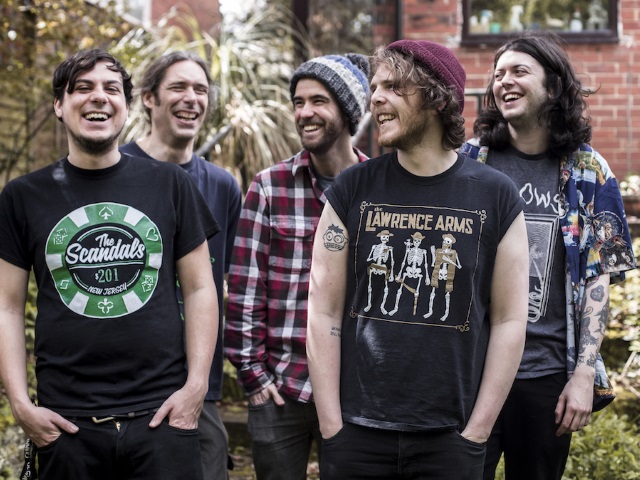 After releasing their album Long In Winters earlier this year, it’s been a busy summer for Leeds folk punks Jake & The Jellyfish who have been touring and appearing at festivals. We caught up with the band to hear their top tips and some amazing stories from their time on the road.

Definitely seeing so many friends around the world (and in the van) that I don’t get to see as much I’d like.

Our 19 hour drive from shows in France to Wiener Neustadt in Austria is something I will never forget. It was our first time in Europe and we were just happy to be being booked for shows so decided to risk the drive. We hit traffic about a million times, drove through 4 countries, and had the best time. Our set in W.Neustadt was meant to start at 9:30 and I think we arrived at 9:26. Luckily we were met by some of the nicest people ever, and were greeted with beers, food and hugs. I dunno how well we played but we were just super happy to be out of the van haha.

Steve once pissed in a cup in the van, then went to throw it out of the window, the wind took it and it splashed Rich (our old guitarist) in the face on the seat behind. He was soooo angry and we were all laughing so much. “It went in my eye!” will never not be funny. I also remember Steve unsuccessfully trying to piss out of the window of the van only to later say that he ended up having ‘his penis flapping in the wind for the entire county of Norfolk’.

The van breaking down in the middle of France right at the beginning of tour without any breakdown cover was not our finest moment, it has to be said. We got picked up by my mate’s parents who happened to be driving past in an empty people carrier…and my dad ha.

We got stuck in loads of traffic on our way to play Kendal Calling a few years back, and missed our set. We were all pretty bummed out and went up to the stage manager and asked if there were any other opportunities to play. Long story short, the headliners of the stage got caught up at the border and we ended up headlining the stage to about 2000 people it was fucking awesome.

Maybe when we realised you could get 24 beer crates in rural Holland for like 6 quid. We had a rider of 2 already and proceeded to buy 3 more. We all happily got smashed before remembering we had to play. …Probably the worst show we’ve ever played. I’m fairly sure we broke Steve that day.

Driving back from Mighty Sounds Festival in the Czech Republic last year, straight after our set and driving all the way to just outside Bristol to play a friend’s wedding was pretty damn rewarding. 14 hours straight drive, arriving just in time to smell out the venue.

See Jake & The Jellyfish at one of the following dates: