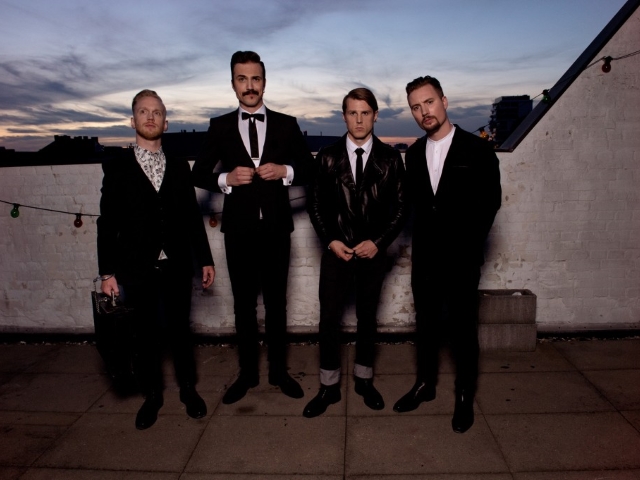 The Classic Grand is absolutely packed this Sunday evening, with Royal Republic’s small but dedicated fanbase turning up in spades. The venue’s 500 person capacity is pushed to its limit, there barely being space for anyone to move by the time Dinosaur Pile-Up have started.

The aforementioned grunge revivalists are the first and only support of the night. The sound doesn’t do them any favours, but they come across pretty well, overall. There’s initially a lukewarm response from the crowd, but this picks up further into their set, around the time of White T-Shirt and Jeans. The more mid-paced Dinosaur Pile-Up tracks sound the best live, with the highlights being Nature/Nurture and finishing track 11:11.

Royal Republic themselves deserve to be, and act like they are, on a far bigger stage than The Classic Grand.

However, this is merely a distraction: the quality of the show comes mainly from well-written rock songs being played by a talented band who are clearly enjoying themselves. The energy from the band is undeniable, but would be nothing without the tight musicianship they display. Their punchy, garage rock-influenced power pop sound lends itself to the live music environment, with the band managing to sound simultaneously musically accomplished and like the life and soul of the party.

A particular highlight of the set is a seemingly impromptu, seamless transition from the end of Make Love Not War into a cover of James Brown’s Get Up (I Feel Like Being A) Sex Machine, which is, like much of Royal Republic’s set, just a whole lot of fun.

Musically, the band stick mostly to newer material from this year’s Weekend Man album, but also play older fan favourites like Underwear and Tommy-Gun (the closer before the encore) from their debut; as well as an acoustic, barber-shop inspired version of 2012’s Addictive.

After Tommy-Gun, Royal Republic come back to play a four song encore, unusually long for a band playing a venue this small. This, as well as the audience reaction, proves their larger-than-life stage presence, as well as their ability to command a crowd. Although Full Steam Space Machine isn’t as uproarious of a finishing song as Tommy-Gun was pre-encore, it still gets the job done, and the crowd moving. Royal Republic’s sound may be something that’s been done before, but it’s done well, especially live, and music fans need look no further for a fantastic, good-time live experience.