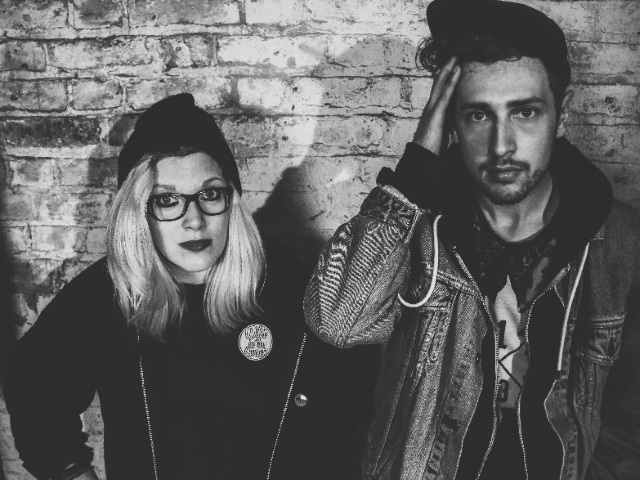 Synth-rockers SKIES returned with their single Hold On last month, delivering a sound that is epic and mesmerising in equal measures. We caught up with the duo to talk about the new material, their forthcoming headline show in London and the most rock ‘n’ roll thing about their hometown…

First off, we loved your single Hold On. Can you tell us a little about the song’s meaning and how it was written?

Jericho: Thanks guys! The song started with an instrumental piece I wrote one afternoon. I had a good feeling about it so passed the song along to Alie to write some lyrics. Turns out she had already written some lyrics that day and they fit perfectly. It was one of those fairytale writing moments we wished happened every time!

Alie: The song is my based on my thoughts about being mortal and an exploration of that. It’s just something I was thinking about a lot at the time and wanted to voice it a bit I guess.

What are your writing inspirations in general, both musical and non-musical?

A: I write all the time because I’m always listening out for a lyric in a phrase or overhearing everyday conversations. I want to write in a way that’s real and people can just relate to! Combining realism with a bit of poetry if it feels right.

J: I usually stew on other people’s music, then get annoyed because I want try and write better. So I’ll hit a solid couple of days jamming out some of my own ideas or music to acoustic and vocals parts Alie has written. I love a good listen to Brand New, Funeral for a Friend, Jimmy Eat World. I love an Emo tune or two…

So there are only two of you which is impressive given your huge sound. How do you perform it all live?

J: Over the last couple of years we’ve been trying this SKIES thing, we have tried a 5 piece set up, a 4 piece set up, a 3 piece set up and now finally 2 piece. Since the start I’ve always wanted to have that idealistic “this-is-all-live” thing, but over time we’ve come to focus on whats best for us as songwriters and performers and thats the energy on stage and the vibe the songs in all their depth create in the room. So now we use Ableton Live 9 a lot for our synth tracks, Alie sings lead vox and plays guitar and I play drums and do backing vocals. We also both play a little bit of synth on stage where possible.

You’ve been playing a number of live shows, how have they been?

A: They’ve been so cool! Our last few shows were with The Lafontaines and Evarose. They were lovely people to meet and share some show’s with and their fans are some of the nicest and supportive we’ve met yet!

What can new fans of the band expect at a SKIES concert?

J: Lots of noise, lots of passion and energy… and lots of free stickers!

What’s next on the live agenda?

A: We have our first London headline show at Camden Assembly (was Barfly) on the 19th October. We’re putting a lot into it to make it the biggest and best SKIES show yet, so we’re really excited to smash that one!

What’s next on the new music horizon – any more singles, or can we hope for a full release?

J: We’re heading to our good friend and producer Oz Craggs‘ Hidden Track Studio’s  at the end of September… An EP could well be on its way for sure!

What’s the most rock n roll thing to do in your home town of Folkestone, Kent.

Well… Folkestone’s a coastal town…. So either a creaky descent down the Leas Cliff on the water lift or a joyride down the Harbour Arm on a rickshaw! Pretty rock n’ roll….

Thanks again for talking to Bring The Noise, is there anything else you’d like to mention or plug?

We really can’t wait for our headline show in October and would love to have you there! And the classic I guess is feel free to check out our website – there’s lots to do on there and we’d love to hook up with you on our socials if you’re up for it!

VIDEO NEWS: Against The Current Reveal Video For ‘Young & Relentless’