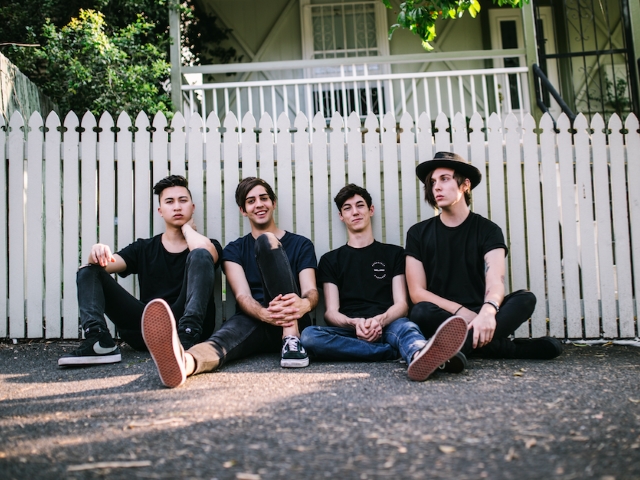 Ahead of the release of their debut album Better Weather we sat down with Jayden Seeley and Luke Rockets from Aussie pop-punk outfit With Confidence to talk albums, pubs, and the future. Having mentioned the hangovers Slam Dunk North had provided them beforehand, we knew this was going to be a fun chat!

This weekend marks your first Slam Dunk and UK festival experience, so how did you find the show yesterday?

Jayden: I don’t know, it was like mind blowing. I had the best time.

Luke: It honestly exceeded all our expectations, we didn’t expect to play to even a quarter of the number of people we played to. The crowd was really responsive and we got to share the stage with some bands we’ve grown up loving so it’s really surreal.

J: Just like everyone all the mates we’ve made along the journey in the band, it seems like they’re all here. They’ve all come together in one place and I think that’s a really cool thing and one of the things I really loved about it.

We recently saw you with As It Is in Underworld and it was clear to see you already have a solid UK fan base, what do you feel has been key to gaining this?

J: I don’t know it’s interesting like obviously you’ve got social media and technology now which allows us to push our music to places we’ve never even been before. But signing with Hopeless as well, signing with Hopeless Records allowed us to push our music into places we’ve never been. Those have been the main things for sure.

What British bands, food or anything have you fallen in love with during your time here with As It Is?

L: Going back to favourite bands related to Britain, not specifically one band but the whole punk-rock movement coming from Britain in the 70s and stuff. Just being in those areas like Camden and seeing where all of this started is pretty surreal and crazy.

How would you say our crowds differ from back home?

J: Yeah they’re not too dissimilar, like back home there’s obviously more people shouting our lyrics back to us and more people know our songs as we play there for like the past three years.

L: But the enthusiasm of the crowds is pretty similar.

J: There are still people that want to get into the set and just have a good time which is really cool.

Your debut album Better Weather is released this month, do you feel the three tracks released from it (Keeper, Higher, We’ll Be Okay) are good representatives of what’s to come from the rest of the album or will there be some curveballs?

J: I think a bit of both. For the most part it’s a good representation. You’ve got your songs like We’ll Be Okay which are a lot more poppy and upbeat but you’ve also got your Keeper’s which are darker ones and a sort of a bit heavier. I think that in itself is a good representation. But I think there are a couple of curveballs that people wouldn’t expect which I’m really excited for people to listen to.

L: Being a 10 track album too, we’re all pretty proud of the fact that each of those ten songs individually are kinda their own thing. It’s an eclectic mix on the record. It’s cool.

J: Don’t just expect to listen to a pop-punk album, it’s not all that.

L: Definitely, there’s some experimentation going on with some tracks.

Is there a track on the album which you’d say is the ‘must skip to’ or your favourite?

L: You probably don’t need to skip… it’s track one

J: Track one is my favourite so you wouldn’t have to skip.

L: It’s a song called Voldemort for those who don’t already know.

J: But notable mentions to Long Night, that’s one of my favourites. I also really like Archers as that’s something that people can jam to for sure.

Would you say the music and bands you listened to growing up have influenced your sound today?

L: For sure yeah!

J: I think it’s more of growing up and listening to these bands, taking influence from them when you see yourself in a shed with four boys writing music. I think it’s just a very natural process like I don’t think I can pin it down to we tried to sound like this or we tried to sound like that. It’s just all the music we collectively listened to formed into our own sound and songs.

If you had to sum up your time in With Confidence with one of your own lyrics, which would it be and why?

L: Oooohh I’m trying to think of the most inappropriate and funny lyric. That’s a good question! “All the love I had for you is dead.”

[A lot of time here was spent umming and ahhing]

L: I’ve got one! It’s from a song called Drive from our last EP called Distance and it’s really straightforward. “We could get so far away,” that lyric because it really captures what we’re doing at the moment, touring internationally on the other side of the world and that song is written about that idea. I was not necessarily expecting to ever really achieve it and here we are!

Apart from your album, Warped Tour and return to the UK with Real Friends, what’s to come for you in 2016?

L: I feel like touring is the top priority on the back of the record release. We’re probably gonna drop another music video or two.

J: We’re gonna try and mix stuff up and do a few things that people wouldn’t expect. Try to make it a big year for sure. We don’t want to be that band which says ‘yeah we’re touring, we’re releasing an album, that’s all we’re doing’. I guess we’re possibly writing too so hopefully moving onto that next record sooner rather than later. Good things hopefully!

Thanks for your time guys, enjoy your weekend!